In Canada: Trump vs. Hollywood

Trump vs. Hollywood filmmaker Daphne Barak interviewed 24 Hollywood stars from both sides of the political spectrum on their candid feelings towards President Donald J. Trump.

As the big tech tyrants tighten their grip, join us for more free speech at Parler—the anti-censorship social media platform.
CLICK HERE FOR THE ORIGINAL ARTICLE IN CANADA
Mia Cathell The Post Millennial
Nov 19, 2020 6:00 AM
Amid calls for national unity, Barak—who is a personal friend of Trump—spoke to The Post Millennial about her documentary that brought opposing ideologies together for a long-overdue discussion to discover just how deeply rooted America’s division is in pop culture. The project is not to be viewed as a pro-Trump piece, Barak explained, but rather an exploration of the current political divide in show business. Barak, a two-time Republican National Convention delegate, was inspired by Academy Award winner and outspoken Trump supporter Jon Voight who mentored behind-the-scenes.Barak’s message intends to unearth “two Americas” and “build the bridge” between the polarized camps. The 120 minutes film is available now on Vimeo and set to hit digital platforms on Dec. 14 on Google Play, iTunes, and Amazon. Taped across 10 cities, the project became a living example of what “Fighting 4 One America” stands for. “We don’t have to agree,” Barak appealed, “but let’s talk.”

Why does Hollywood veer leave?Throughout the sit-down interviews, Barak launched an inquiry into why such “mega-hatred from Hollywood towards Trump” exists.Golden Globe nominee Eric Roberts already cast his vote for Democratic challenger Joe Biden, according to a mid-October ballot posted to social media. “It’s urgent. We have a lunatic in the White House,” he alleged to Barak.

Trump’s inauguration did not see the A-listers who decorated the Obama or Clinton administrations. It became evident that Washington, D.C. and Hollywood was no longer blending, Barak witnessed but feuding.

The president’s physical star on Hollywood Boulevard was covered with plywood ahead of Election Day after its destruction by pickaxe the Friday prior. A sign on surrounding guardrails read, “No public access.” During Trump’s four-year tenure in office, the tourist attraction has been a beacon for vandalism. 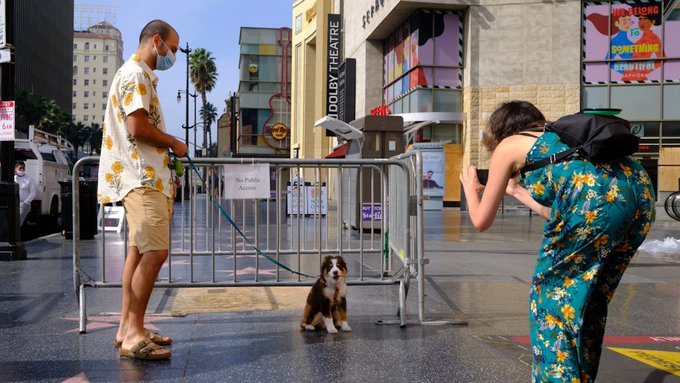 “[Ronald] Reagan was also not really accepted by Hollywood when he ran for president,” Barak cited. “It took a while to ease the tension.”

Before the Republicans sat in the Oval Office, Reagan served seven presidential terms as leader of the Screen Actors Guild. The 1980s president went on to reshape the GOP and lead the modern conservative movement.

“Ronald Reagan was impressive because his street-savvy was actually refined, sophisticated during an era where refined and sophisticated was beneficial,” rock and roll guitarist Ted Nugent explicated the phenomenon to Barak. “Those days are over. You get a Mitt Romney and a John McCain and they bring a doily to a grenade fight. I mean, how pussified can you get?” He jabbed.

In September after his summer tour was canceled due to the COVID-19 pandemic, Nugent launched the sale of autographed “Re-Elect That Motherf—er” hats, a spin-off hat tip to Trump’s red “Make America Great Again” merchandise.

Former NBA player Glen “Big Baby” Davis commended Trump. “You have big balls, brother,” Davis quipped. “I respect it. You respect the man, him, and his way of life. Every man is trying to be a king in his own way.”

Trump rose to stardom as the host of The Apprentice series, which boosted his 2016 bid for president. His iconic “You’re fired” catchphrase kicked numerous contestants off the reality show.

Celebrities and liberal pundits alike took to Twitter post-election to fling the slogan back at Trump. USS Enterprise helmsman George Takei did not “live long and prosper” during the fifth installment of The Celebrity Apprentice.

Los Angeles lawyer Mark Geragos, who represented Empire’s Jussie Smollett in the 2019 hate crime hoax, pointed a finger at NBC executive Jeff Zucker for signing the real estate mogul back then, placing him on-air, and transforming Trump into a household name.

Zucker is now the president of CNN, which Geragos called the leader of “the resistance,” while MSNBC—owned by NBCUniversal which housed Trump—” is virtually from dawn to sundown an anti-Trump vehicle,” he detailed.

“So what I’ve seen with the media—was notorious for having nasty, dirty, low-life Hollyweird behavior—attack this man because he’s the president,” Grey’s Anatomy television doctor Isaiah Washington observed on camera. “I began to put it together: He knows their secrets. I would be a little nervous too.”

After celebrating the bipartisan Trump-signed First Step Act at the White House, Washington backed Trump and joined the #WalkAway movement, a social media campaign that encourages left-wingers to leave the Democratic Party.

Washington had slammed former President Barack Obama, whom he voted for twice. “Not once in 8 years was I given any support regarding Africa or the Black Agenda,” Washington leveled against the 44th president at the time and instead praised Obama’s successor.

“People said, ‘You’re hating on Obama.’ He didn’t do what he said he was going to do,” Washington charged. “Were you scared it would affect your career in Hollywood,” Barak asked. Washington chuckled, “Are you kidding me?”

Barak recounted when two events were set to converge during the same week in September 2019: the 71st annual Emmys and a Beverly Hills fundraiser for Trump’s re-election efforts. Will & Grace actress Debra Messing requested The Hollywood Reporter to “print a list of all attendees please.” Messing added on Twitter: “The public has a right to know.”

“Blacklisting hasn’t happened in Hollywood since McCarthy,” Barak commented, referencing the mid-20th century Red Scare widespread in the entertainment industry. “We cannot do that again, because if we start blacklisting, then the next time, you might find yourself on the blacklist.”

Barak mentioned that multiple subjects in her film stressed that they support Trump but “cannot afford to say that” in a public light out of fear of being “banned”—expunged from polite society. One unnamed Oscar winner even declined an interview. “Leave me out of this film,” the talking head pleaded with Barak. “I’d get myself into trouble.”

“There’s supposed to be freedom of speech in America,” Barak asserted. “That’s why it’s the First Amendment, not the Second or the Third. You should be able to express your opinions about a wide range of topics, including who is supposed to be the occupant of the White House.”

Celebrities have even lost job opportunities for their conservative views. “Thank God for independent movies,” emphasized Hercules lead Kevin Sorbo in one scene. His agency dropped him “like a hot potato.” Sorbo found faith in Christian dramas like God’s Not Dead and Let There Be Light. “If I didn’t have independent movies, I wouldn’t have a career anymore,” Sorbo professed.

Sorbo among others was forced to be creative in their endeavors when mainstream Hollywood refused to embrace the political mavericks. “What we found out in this film is whoever can think outside-the-box is managing to work,” Barak noted.

“There’s no compassion. They’re so hypocritical. It’s unreal,” fired Man of Steel actor Dean Cain who starred as the titular hero in Lois & Clark: The New Adventures of Superman. “If you just can’t be friends with somebody whose political opinions are different than yours, you’re a bigot.”

Happy Days actor Scott Baio’s remarks in the trailer caught fire online. “It bothers me that people won’t speak to me, because I’m a Trump guy,” Baio lamented. “If you’re not hiring me because I’m a conservative, shame on you.” Then he jested, “If there’s a civil war, don’t forget who has all the guns.”

“I want to stand up. It’s okay to just be yourself,” actress Kristy Swanson, famous for playing Buffy Summers in the 1992 comedy horror flick Buffy the Vampire Slayer, declared. “I don’t like to ever feel like Hollywood decides who I am.”

Swanson pressed: “It’s time to set the example of let’s just all get along. We can learn from each other. We don’t have to hate each other.”

Barak highlighted how George Floyd’s death pivoted the script’s editorial direction and evolved the dialogue. “Almost nine minutes of murdering somebody like that really moved me,” she revealed.

West Coast hip hop artist Too $hort said to Barak: “You don’t want to know how many times I was in George Floyd’s position.” He described instances where he was arrested without documentation or handcuffed for “suspicion.”

“People of color who are very respectable have to think to themselves—especially black men—have to think to yourself before you walk out your house and go to work every day: I hope I don’t run into a crazy white guy who’s just mad for no reason,” Too $hort proposed.

Barak talked to Trump three days before Nov. 3. “Let’s get this election over,” Trump said on the late-night conference call after his fourth campaign rally that Saturday. “As soon as possible, we’ll meet at the White House and we’ll discuss a lot of good things.”

Barak, alongside a prominent group of African American entertainers who headline Barak’s film, accepted the president’s invitation to visit in December and engage in a “much longer conversation” as they tackle important issues facing the black community.

“I am pleased that President Trump is willing to have this uncomfortable conversation about how we can help the black community close the wealth gap,” stated rap pioneer Eric B.

The lifelong Democrat shed a light on how state-level elected officials are not examined to the same degree that Trump is scrutinized. “But what about our local guys?” he poked. “We’re letting them slide. These are our lawmakers, the guys making our changes. We’re not holding them accountable.”

The rapper exhorted viewers to look at the “bigger picture” while “everyone’s focusing on Trump” who has “one vote at the table.”

“Racism is forever,” stand-up comedian DeRay Davis insisted. “We can try to fight it and say, ‘End racism.’ It’s practically impossible especially when there’s no uproar.”

To Plea or Not to Plea

Struggling for One America

NOTIFY ME AS SOON AS VIDEO IS POSTED